You Are Here: About Valleys, Crests and Hills

About Valleys, Crests and Hills 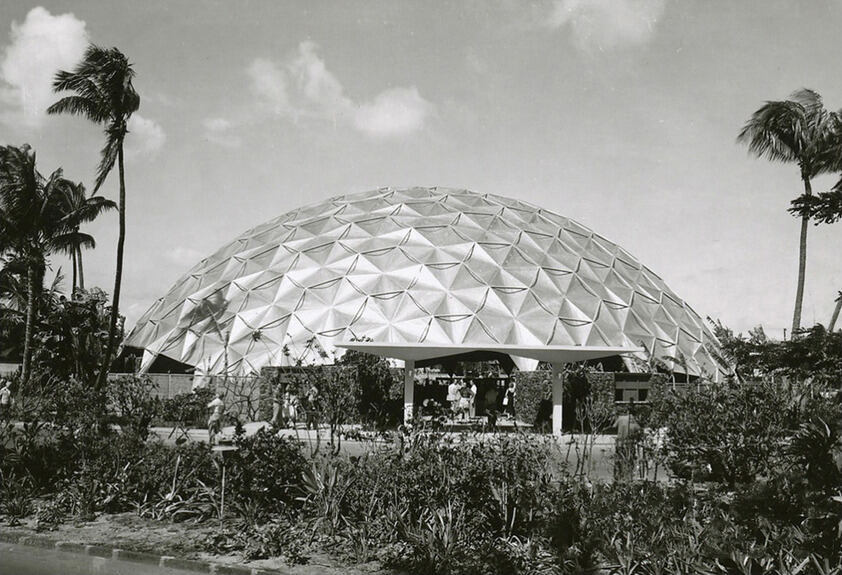 Steel construction in the context of building engineering and structural engineering still implies a construction system based on linear elements with standardized sections which are joined together at knots and combined with secondary and tertiary structural elements like beams and façade panels. Particularly efficient, or even lightweight structures, that employ spatial loadbearing- effects like membrane- or shell-loadbearing behavior in addition to a bending action, may not necessarily built that way. Referring to automotive and car body design sheet metal is the preferred material for the development of a lightweight building system for spatial structures

At this time however the appli-cation of sheet metal in the context of building-technique and architecture is limited to façade-element-systems. The only structural applications so far are geodesic domes, invented by Richard Buckminster-Fuller (1895-1983). These hemispherical spatial structures consist of folded sheet-metal elements whose geometrical layout was derived from a tessellation based on the Platonic and Archimedean solids like the Truncated Icosahedron. Its edges form a net of pentagonal and hexagonal meshes with a uniform edge length, a most suitable source of tessellation, which can be easily sub-divided by triangulation. An especially famous example of this category of domes is the Kaiser Dome in Hawaii by Donald Richter, built in 1957. Other geodesic domes, erected in exhibition grounds or theme parks, were modelled after this example.

The development of a self-supporting lightweight-building-system of sheet-metal based on these sources is a task, to which the Chair of Structures and Structural Design has dedicated several years of its research work. In close cooperation with the Institute of Metal Forming (IBF), also at Aachen University, various geometrical components and patterns were investigated in accordance with suitable sheet-metal forming processes. Starting from investigations of the adaption of folding- and Origami-principles onto sheet-metal structures, a variety of patterns suitable for structural purposes were developed and evaluated with regard to their application in production processes. The most important steps of this research, as well as a brief description of the results, are described in the following paragraph.

Copyright: © Chair of Structures and Structural Design a) Longitudinal folding b) Facetted folding

Starting from the design of geodesic domes with their folded triangle plate elements folding and folded-plate structures turn out to be a principle, particularly suitable for a structural building-system from sheet metal. Folding is a structural principle, which we can encounter variously in nature.Through folding the structural performance of thin –walled material may be enhanced by the increase of the moment of inertia in meandering the section area around the static centre-line or centre-plane. Two basic types of foldings may be distinguished: longitudinal folding with folding edges (valleys and crests) running parallel or in a slight skews and facetted foldings (hills) with edges intersecting at points. Both sorts of foldings may be combined with itself and also with a plane unfolded layer. By combining plane and folded elements, two types of layers with distinct characteristics emerge. While the unfolded layers and the most distant zone of the folded layer carry bending moments, the folded layer, sandwiched in between, transmits the shear forces. Combinations with the plane layer are preferable for combined structural and cladding applications as the facetted but basically plane surface offers best preconditions to bring on further layers with other functions (e.g. heat insulation). Facetted foldings combined with plane elements may be generalized and transferred to another principle of Structural Morphology, consisting of only two plate-layers, connected by humps or ribbings, distributed in a regular rhythm and punched in in one of the two plates. Similarly from a structural point of view the humbs and ribbings transmit shear-forces, whereas the two plate-layers, an upper and a lower one carry bending moments. These plate systems may be addressed as Sheet-Metal Fold-Core Plates. 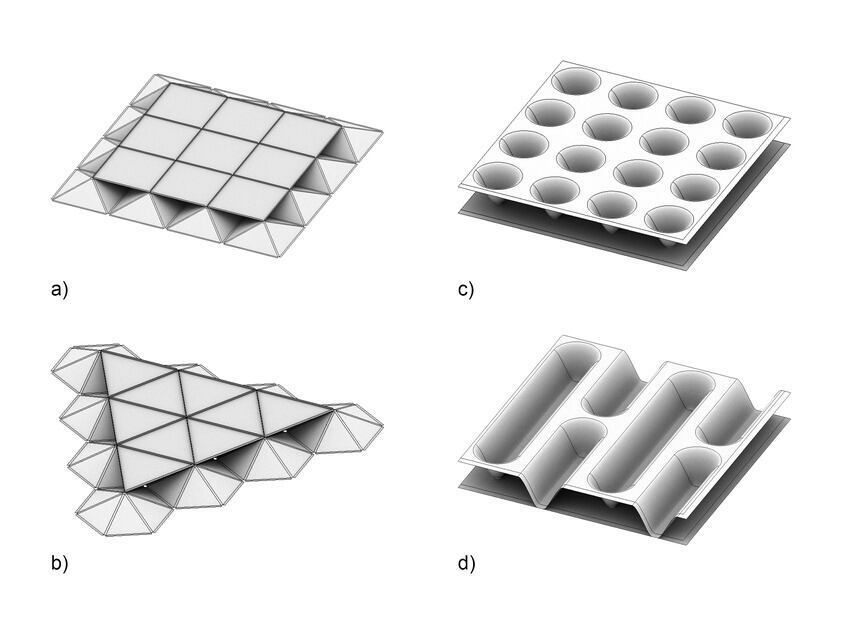 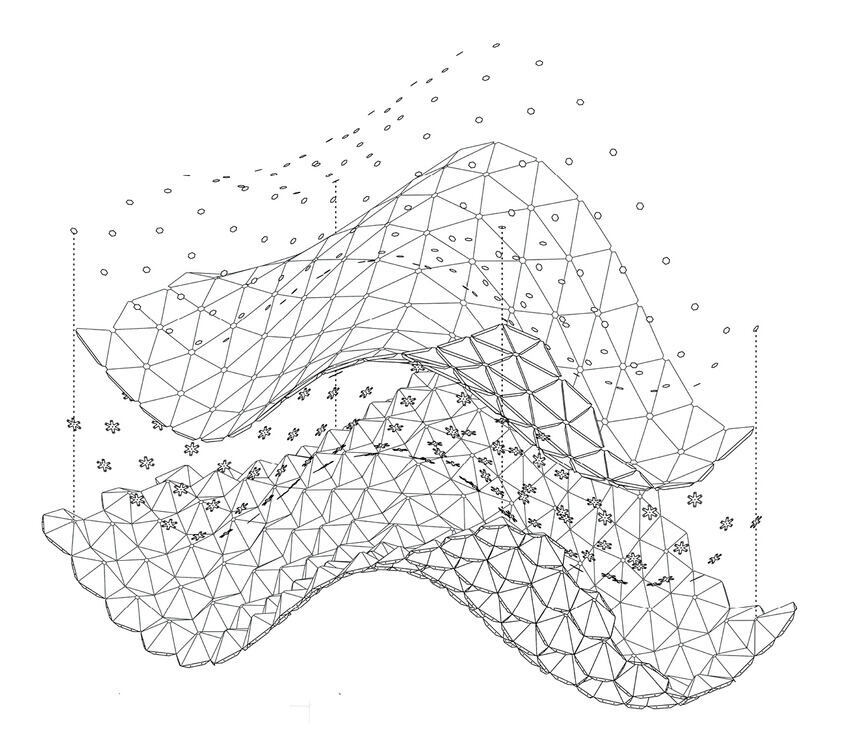 Developments in CAD-systems with embedded functionalization and connotations, so-called ‘Parametrical Programs’ allow us not only to think about topological building systems but enable us to describe complex geometries of any spatial form and to generate highly complex tessellations and elementations. Unintended collisions and intersections of the elements in the final state, but also during construction process may be checked in the parametric model in advance, and – if necessary- adaptions may be carried out. The ‘Parametric Power’ allows the control of the location orientation of each element and the fit into the ‘Big-Size-Puzzle’ of building parts and the assignation of the location information to each single element. The detailing may be extended optionally to joint elements and their positions a.s.o.. That way the entire geometrical information of each element and its modification may be accessed for further optimization-processes and ultimately for the production process. 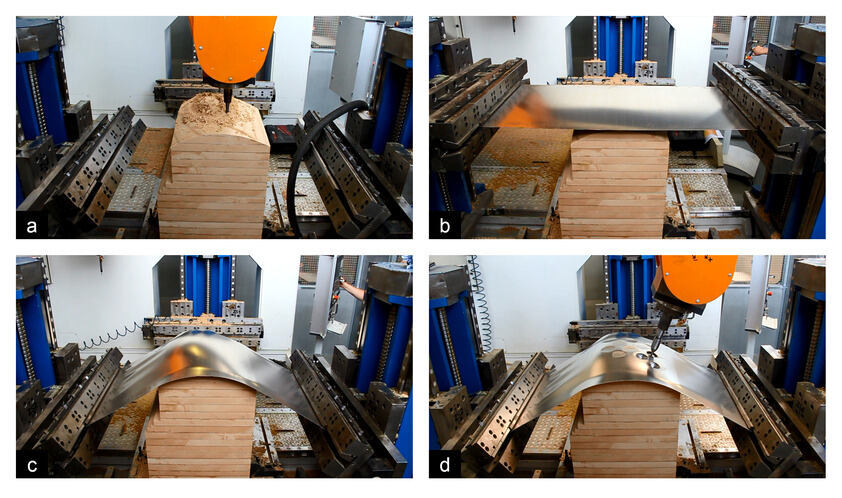 Copyright: © Chair of Structures and Structural Design Production-process of a Fold-Core Plate with punched-in cones. a) Remiling of die b) Start of a production sequence c) Stretch Forming of basic Curvature d) Incremental Sheet Forming of conical humps

Sheet forming is traditionally a process bound to costly steel formwork and comprehensive industrial manufacturing equipment. Innovative forming-methods like the Incremental-Sheet-Forming (ISF) however, combined with other processes like Stretch-Forming (SF) a.s.o. allow for a minimization of form-work by the introduction of a simple universal formwork elements in combination with software-based geometrical information driving the active tool in the sheet-forming-process. This is a CNC- controlled forming bar, running on helical paths, pressing the sheet locally, initiates plastic deformation in a sequential manner, that results in the final shape of the metal sheet. A minimum of set-up time is needed to produce topologically related sheet parts with different measures and formwork. The production process of sheet-forming-parts becomes economical, despite of the geometrical variety of the parts. If those parts produced on basis of ISF are combined with plane sheet elements, these may be manufactured by classical sheet bending.

Another way to produce individualized sheet-elements with a double-curved shell-like form similar to the generalized principle of Structural Morphology with humps and ribbings can be achieved with the combination of ISF and SF with an individual formwork made from wood materials. Herewith the same appliances as for the ISF are used. However instead of the forming bar a conventional milling-tool is used. This way the manufacturing equipment first produces the formwork in a milling process out of an inexpensive material that can be processed quick and easy (e.g. MDF Medium-Density Fibreboard). Afterwards, this ‘one-way die’ is used in the incremental sheet forming process, where it generates the double-curved shape and the punched-in humps in the actual sheet-element.

The computer-based design and preparation of these sheet-metal lightweight-structures as well as the transfer of the generated data to CNC-controlled production machines represent a nearly ideal file-to-factory information processing. The production process is directly controlled by the computational design and generation process and its output. Assembly and logistics are not yet incorporated, whereby the production-logistics concerning the feeding of ISF and IS appliances or laser-cutter for the tailoring of the parts may be carried out by pick-and-place-robots. The degree of automatization of the assembly of the entire final structure depends very much on its dimensions. For this purpose special robotic appliances have to be developed.

Computer controlled methods have developed further in all fields of technique. In the field of CAD, the options of design, description, generation and optimization of complex geometries enable us to anticipate the entire designing and optimization process of a planned object in a virtual environment. Tessellations and elementations based on topology open the way to discretisation of any spatial form. Local reinforcement and local structural enhancement may be incorporated solely by variation of the global or local geometry. Such a spatial structure may be represented by a topological building system where just only the individual measuring of the parts vary.

CNC-controlled tools and machines help to individualize the production processes in many different materials like timber or sheet-metal. Timber may serve as a sustainable material to produce ‘Smart Dies’ as well as other tools, employed in the sheet-forming process. The design and production tools complement each other in a way, that fully automated file-to-factory-processes can be developed. This allows the production of geometrically highly complex building kits like e.g. the sheet-metal lightweight-building systems based on folded elements developed at Aachen University.

There may be other principles of structural morphology that need to be tested for their properties of elementation and their suitability for the production processes. The basic tools and methods however are already available to transfer Euklidian constant measuring from virtuality to reality.