You Are Here: Optimization of Lightweight, Fold Based Structures

Optimization of Lightweight, Fold Based Structures

Folded load bearing structures, such as geodesic domes or tunnel vaults have been built out of rhomboidal shaped elements of sheet metal or plastic paneling, since the early 1950's. Based on an elementary and symmetrical geometric form (such as a sphere or cylinder), such folded structures lead to a uniform tessellation and can be broken down into identical or group wise identical base elements. Since the arrival of CAD programs, it has become possible to tessellate non-symmetrical, free form surfaces, and transform them into single or multilayer folded structures consisting of a various of unique base elements. In view of the simplicity of their production and assembly, the members of a folded structure that are planar, are in advantage over those of a shell that are continuously curved.

Copyright: Chair of Structures and Structural Design Foldings, whose efficiency where previously researched with the help of a parametric study.

The goal is to develop algorithms, which translate given, for example by FEM determined, field vectors into trajectories and tessellations, and transform them under constructive considerations (such as effective depth and folding frequency) into folded bearing structures. Furthermore, algorithms are to be developed, which, with respect towards the modification of the initial form and folding pattern, produce folded bearing structures with a reduced number of geometrically unique folding elements. 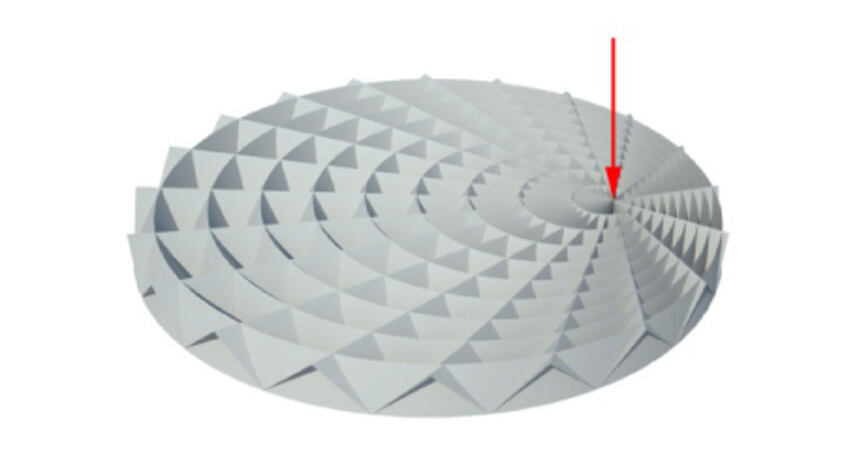 Within the framework of parametrical studies, the affect of the folding optimization process is to be evaluated for selected planar and curved surface geometries by comparing the required building structure mass for a dictated load bearing configuration. The results should shed light on the effectiveness of a light weight building system, based on the load bearing optimized folding principle and reduced single element diversification. Such a system is, because of its simple structure and elements equally predestined for application in Architecture, Civil and Mechanical Engineering.
The project is funded by the "Deutsche Forschungsgemeinschaft DFG".