You Are Here: Reinforcing With Screws

Conventional timberscrews are partially threaded and normally used for shear-connections similar as nails or steel dowels. New types of screws with self-drilling or self-tapping heads could be fitted fast and easily with electrical tools and are commonly used for fixing board materials in wall and floor constructions.

The self-tapping continuously-threaded screws are specially hardened to reach a high tensile strength of over 800 N/mm² and thus can bear high axial load even with small core diameters, reducing the danger of splitting. The high strength and continuous bond enables the use of these screws for reinforcing and joining timber elements similar as in reinforced concrete construction.

The approach for using continuously-threaded screws for reinforcing timber elements is based on the special structure of the wood which has a distinctive anisotropy. The cellular structure implies a low weight and the longitudinal fibers provide a high strength parallel to the grain, enabling a high efficiency of structures stressed in the direction of the wood fiber. Perpendicular to the grain wood shows a rather poor performance regarding both strength and stiffness. Especially the tensile strength orthogonal to the fibers is very low giving the danger of splitting failure. The shear stiffness and shear resistance of the wood is also relatively low compared to the longitudinal stiffness and strength. The performance of structural timber elements can be increased by systematically reinforcing these ‘weak’ directions with continuously threaded screws. The screws are used to carry tension and compression loads rectangular to the fiber direction as well as shear forces diagonal to the grain. The reinforcement screws can be applied both locally in areas of load concentrations and globally to raise the strength and stiffness of the whole element.

Placing an internal reinforcement with screws is suitable to canalize the flow of internal forces, thereby reducing the negative effects of local material deficiencies and the risk of unpredictable failure causes.

To promote a broad use of continuously-threaded screws as reinforcements in timber construction a general dimensioning concept is necessary which enables the engineer to easily adapt the layout and positioning of the screws to any given task of reinforcement and joining. A basic need for that is the knowledge of the flow of forces within the structure or connection. Because of the anisotropy of wood the classical analytical methods based on technical mechanics can only be used to a limited extent. The complex boundary conditions, for example in areas of bearings or load transfer, the dependency of material properties from the direction of the grain and the composition of compound systems build from different materials, i.e. wood and steel, enforce the use of numerical calculation methods. Thus for practical application a simplified design method is needed, allowing the dimensioning of reinforcements with simple means.

A promising approach to describe the structural behavior of screw reinforcement is the use of strut-and-tie-models as used in reinforced concrete construction for the layout and dimensioning of bearing or notch details. These strut-and-tie-models allow an idealized modeling of the internal flow of forces by assigning them to the elements of the virtual truss inside the timber beam or joint. The Figure shows examples for simple strut-and-tie-models.

The strut-and-tie-models reflecting the internal flow of forces can be constructed based on engineering experience or existing models and examinations of the flow of internal forces. For more complex systems a preliminary analysis using finite elements method might be necessary to construct the strut-and-tie-models according to the directions of the principal stress.

Fields of application for reinforcement with screws

Self-tapping continuously threaded screws can be efficiently used in many applications of strengthening and joining timber structures and also be combined with additional structural measures like steel connectors lamellas. The Chair of Structures and Structural Design at RWTH Aachen University conducted two research projects in the years 2007 and 2008 to examine different reinforcement types for beams and structural joints. 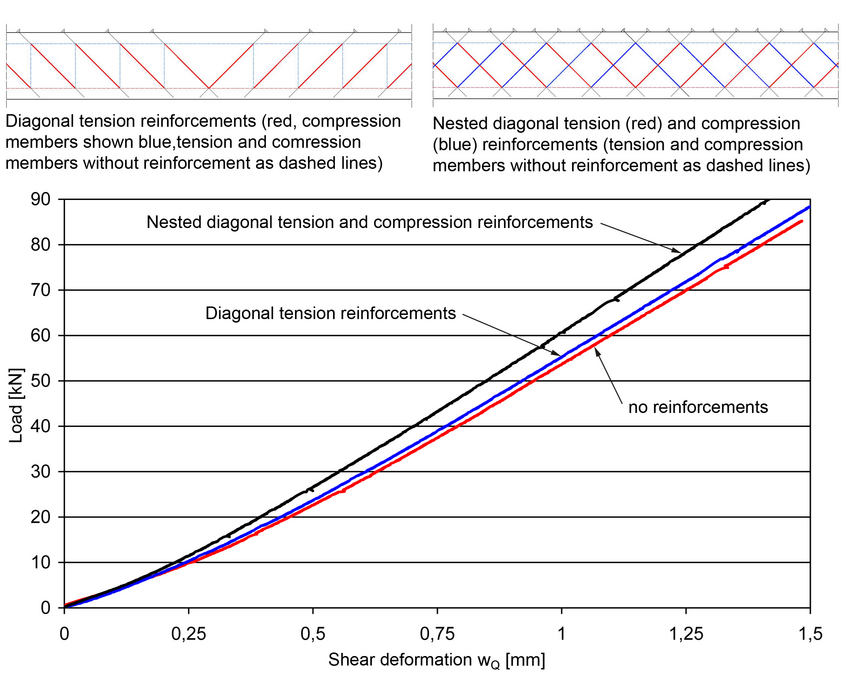 Copyright: Chair of Structures and Structural Design Two truss systems and their shear stiffening effect compared to a timber beam without reinforcements

Continuously-threaded screws were used in different configurations of internal truss systems to increase the shear stiffness of girders. The tests were set up according to the measuring methods in DIN EN 408 with glue-laminated beams of GL 24 quality and a cross-section of 16 by 32 cm. A considerable shear stiffening effect could be shown especially for configurations with truss models where both tensile and compressive forces of the system were conducted by screw reinforcements. A truss system with a combination of diagonal tension members formed by screws and idealized vertical compression members of not reinforced wood had a much lower performance due to the low compressive rigidity of the timber lateral to the fiber. The diagram shows two of the examined truss systems and their shear stiffening effect compared to a timber beam without reinforcements.

The next step was to complement the diagonal and lateral shear reinforcement with longitudinal reinforcement elements to raise the bending stiffnes and flexural load bearing capacity. It was decided to use external steel elements for bending reinforcement. The high strength and modulus of elasticity of steel allows an efficient strengthening of timber beams even with small profiles. Thus steel lamellas were preferred to wood based materials such as laminated veneer lumber. The steel lamellas were fixed to the timber beams with diagonal screws and with the help of special anchoring chocks. As the lamella and the beam form a flexibly connected compound system the stiffness of the interface is crucial for the performance of the reinforced beam, regarding both load bearing capacity and flexural rigidity. The high axial stiffness of the screws and the slip-free design of the anchoring chocks resulted in a high compound stiffness. The test setup with steel lamella and anchoring is shown in the introducing picture. 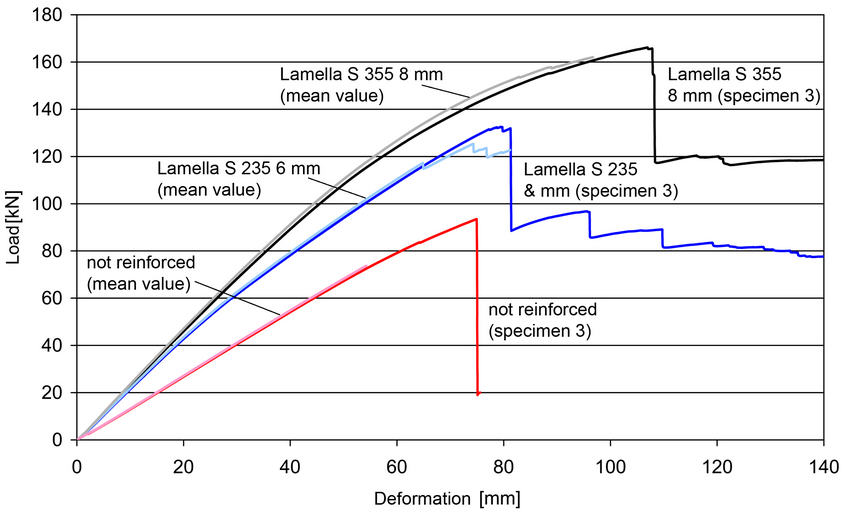 Copyright: Chair of Structures and Structural Design Load-deformation-diagrams for beams with lamella reinforcements

Two different lamella configurations were examined for strengthening glue-laminated beams of the dimensions 16 by 32 cm and a single span of 5.76 m: a 6 mm thick lamella made of steel quality S 235 and an 8 mm thick lamella made of steel S 355. The structural behavior of the reinforced beams compared to a reference beam without reinforcement can be seen in the diagram.

The test results underline the high performance of the combined reinforcement with internal truss-like screw configurations and external steel elements. This method is especially suitable for a posteriori reinforcement of beams and girders in renovation and rehabilitation of structures because it can be applied in situ and relatively unaffected by moisture content and surface quality of the timber and the external climatic conditions.

On the field of connections of structural elements in a first series of tests tension members with a square cross-section were joint with a one-sided fish-plate and tilted screws. Compared to a conventional reference joint connected with the maximum number of geometrically applicable steel dowels the screw joint had an 18% higher load bearing capacity and a notably higher longitudinal stiffness. Furthermore the connecting reinforcement screws channeled the internal flow of tensile force within the wooden fish-plate so that the eccentricity of the load was reduced and a flexural fracture of the plate prevented.

A main field of research on screw connections have been rigid frame corners constructed as one-layered miter-joints. The joints were designed for positive and negative bending moments.

The load bearing capacity of the joints could be raised in the course of the two research projects by improving the layout and maximizing the number of screws for the connection. Both for negative and positive bending moments the ultimate load was significant higher than the characteristic values of calculated conventional corner joints such as steel dowels arranged in a circle or glued finger-joints.

The used strut-and-tie-models hence proved to be a suitable method for dimensioning and layout of the examined frame-corners. The concentration of stiff reinforcement elements to direct internal forces onto a predefined path was also used in the design of the corner joints. By installing very stiff threaded steel rods close to the inner corner of the joint for negative moment, the lever of forces in the miter cut could be maximized thus raising the transferable bending moments. At the same time the indentation of the wood at the inner corner was reduced, leading to an increased rigidity of the whole connection.