You Are Here: Wood and Screw Composites 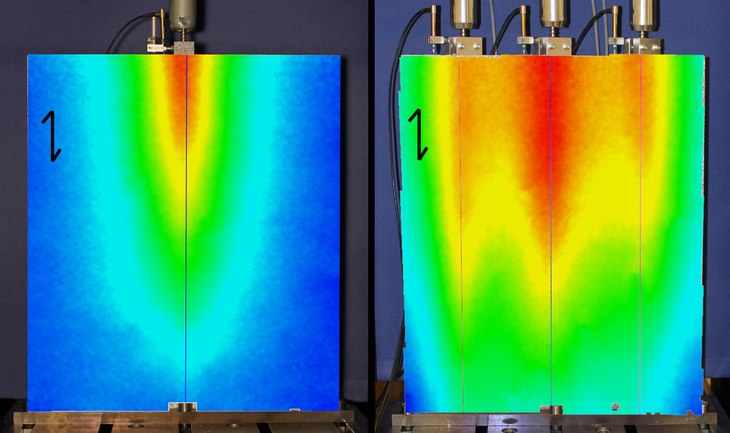 Self-drilling full-thread screws (VGS) due to their high strength and their available length of 1000 mm, a basic element for the reinforcement and direct addition of wooden components is. Due to the high share of threaded surface relative to the core cross section and because of the continuous network of full-thread with the timber the composite properties of VGS excellent and comparable to those of reinforced concrete reinforcement.
The systematic enhancement and addition of glulam parts by means of full-thread screws in terms of reinforcement, was investigated under several subprojects at the Department of Building Structures with component tests. Lack of usable knowledge to composite behavior of the composite material bolt-wood - especially for large composite lengths (le> 20d) had to be replaced by maximum available or geometrically possible installable lengths the respect necessary to the bond behavior fitting lengths of the screws.

By means of experimental, analytical and numerical investigations are the basics of composite behavior of a bolt-wood composite material, taking into account the anisotropy of the wood in short and long term applications, developed in order make an informed assessment of components and additions, as well as the determination of coil configurations in terms of reinforcement design is made possible.
Here, a model for power transmission between screw and wooden matrix was based on the pull-out tests of fully threaded screws with different angles to the direction of the grain developed which proceeds on the one hand by a pure shear connection claimed envelope to the screw thread around, on the other hand by an indirect supporting effect, in which the screw thread as a result of deformation by annular reaction forces in the surrounding matrix is ​​supported. The photo optical deformation analysis makes it possible to examine the global deformation and strain both in the load direction, as well as vertically separated them.