You Are Here: Early iron bridges of south-western Germany 1844 to 1889 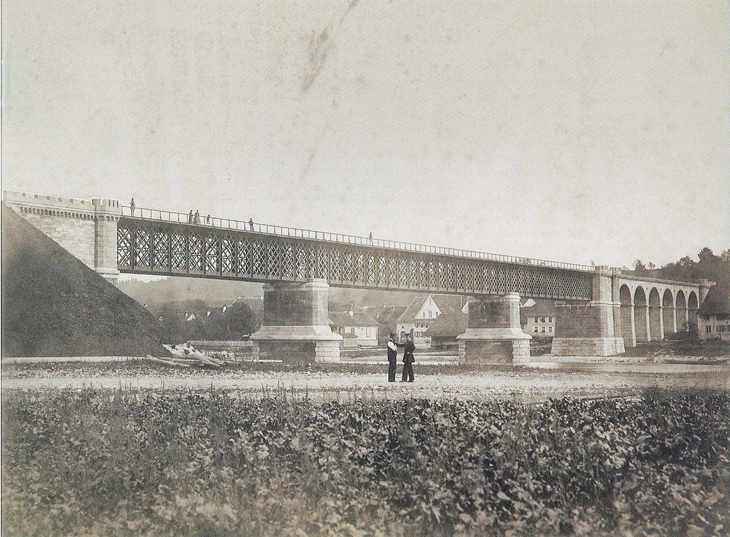 When imagining the first large imposing iron bridges built after the mid-19th century in Germany the first association is drawn to foundries on the rivers Rhine and Ruhr, such as Harkort, the Gutehoffnungshütte or MAN. But it is easily ignored that during the early phase of industrialisation ironworking factories were effectively operating also at other locations. One of these places was Pforzheim with the factory of the Gebrüder {Brothers) Benckiser. The two most striking location advantages for the early-industrial iron mill operation there were lumber as firewood and waterpower. Unlike the regions of the Ruhr there was no black coal at Pforzheim. From the early minor mill factory an iron plant of international importance prospered. For more than four decades the factory at Pforzheim constructed iron bridges for the railway companies in Baden, in Württemberg, in Hesse, in the Bavarian Palatinate as well as in Switzerland, Austria and Hungary. Following the foundation of the German Empire in 1871 the company at Pforzheim had increasingly difficulties meeting the competition pressure from the large companies on the Rhine and the Ruhr. Production came to a halt and the companies' history faded into obscurity. Maybe due to this, the archives in procession of the family Benckiser remained undiscovered and unexplored, jet well preserved. So now it is possible to trace the story of the bridge building company and to judge its relevance to construction history anew.

Since the time of the first iron Bridge at Coalbrookdale until the 19th century iron was understood as cast-iron: because almost all early iron bridges were made of this brittle material. Based on this engineers designed intuitively correct compression loaded arch-structures, which had enough load bearing capacity for road-bridges, however which were not suitable for highly loaded railway-bridges with mobile loadings causing dynamical effects. For railway bridges the much more sustainable wrought iron had to be applied and other structural systems had to be developed. The Britannia and the Conway Bridges on the railway between Chester and Holyhead in Northern Wales, designed by Robert Stevenson (1850-1894) in 1850 were of the first huge tubular beams made from large wrought iron plates, a milestone in engineering of that time. A few years later in 1857 a similar tubular bridge structure was finished, the Weichsel Brücke in Dirschau (nowadays Poland}, where the iron plates were replaced by lattice girders constructed from crosswise arranged wrought iron ribbons according to the lattice girders invented by the American engineer /thief Town (1184--1844}. Despite of various technical and statical problems of this construction the lattice-girders had important advantages concerning manufaction as well as the construction of multi· span beams designed this way.

From Lattice Girders to Truss Girders

Between 1856 and 1858, Bros. Benckiser, a company from Pforzheim in Germany, had built several lattice girder bridges for Switzerland's railway companies. In contrast to developments in Prussia, they were built as continuous beams without joints, spanning three to four bays. Benckiser used this structural feature for the construction process of the bridges and optimized it that way. The box girder was prefabricated as lattice girder at one abutment side and pushed on rollers and lifting mechanisms, cantilevering at the intermediate supports, into its final position. With this construction process, which is known today as incremental Launching Method and used primarily in concrete bridge building, Benckiser Bros. constructed two cross-boundary railway bridges between 1859 and 1860: the Rhine bridges Waldshut-Koblenz and Kehl-Straßburg.it was not until 1860 that the company adopted truss girders with single or multiple bracing for steel bridges with parallel or curved chords.